As we honor the 21.8 million American Veterans this week, we also recognize the increasing burdens that Veterans and their families bear upon returning from service. In addition to the hardships of re-acclimating to non-military life, 1 in 5 veterans will report several mental health disorders at least once in their post military experience.

Despite the increase in available compensation and support services for veterans managing mental health symptoms, many veterans delay seeking support and adoption of care and treatment. Although many factors may influence this avoidance, two primary concerns are stigma and lack of access to care services. Adjusting to civilian life can be challenging for veterans, and feelings of embarrassment or shame, combined with limited access to care, presents barriers to providing behavioral health care service for veterans.

Traditionally, clinicians have relied on veterans’ self-report of their own symptoms and mood to develop effective treatment plans. However, clinicians and researchers are no stranger to the challenges of self-reporting. It can be hard to capture the full range of symptoms, and understand how a veteran is doing over time through self-reported recall. To solve these problems, clinicians at the Department of Veterans Affairs (VA) are teaming up with technology startups.

Boston based technology firm Cogito Corp. has developed a mobile app, Cogito Companion, that has the ability to notify participating health care providers about changes in veteran behavior that could represent early warning signs of changes in mental health. The app can detect changes in behavior – and signal to health care providers when a patient could be at risk. Other than a phone, nothing else is needed from the user to obtain this information. The application mines real-time behavioral data from normal daily smartphone usage, such as call and text frequency and geolocation, to provide mental health providers with automatic daily updates on veteran wellbeing.

The mobile app also includes an interactive feature, allowing veterans to leave audio recordings about anything from how their day is going to changes in their health. These audio recordings utilize Cogito Corp. voice analysis to provide feedback to veterans and clinicians about how the veteran is doing. Cogito voice analysis captures how phrases are said through voice features like prosody and breathiness, rather than what is said. 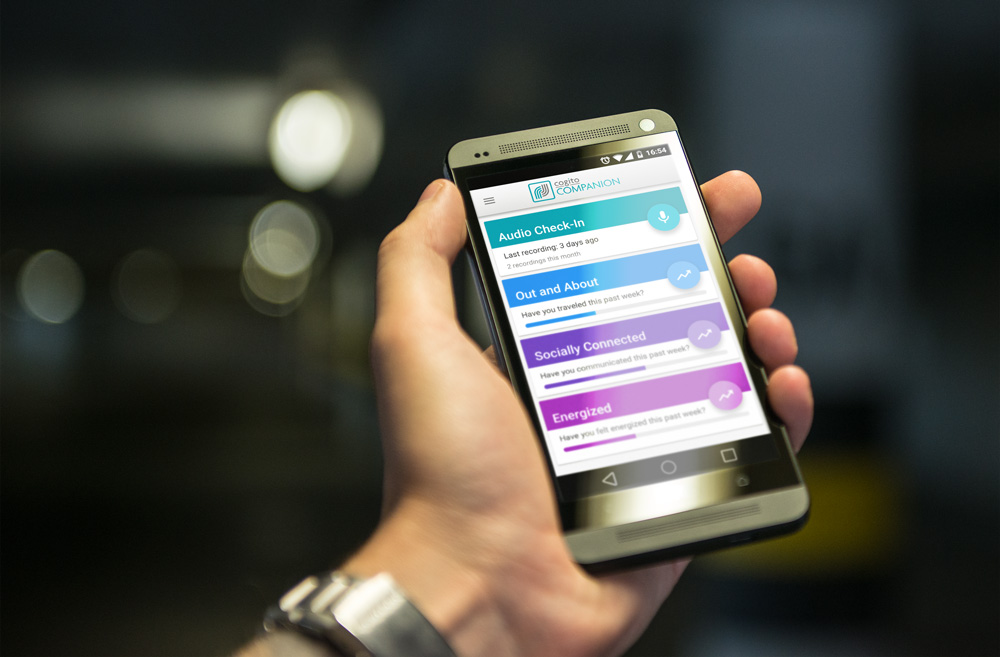 In an ongoing partnership with the VA, Cogito Companion demonstrated high feasibility and acceptability of the mobile application to monitor symptoms of mental health in a veteran population. A group of veterans ranging in age from 18 to 89 years were followed using the Cogito Companion application for several months.  Adoption was near universal, with over 90% of veterans completing the study, 96% of veterans reporting a positive experience with the application and 75% of veterans reported they would continue to use the app to monitor their mental health symptoms. During the study, clinicians were also able to identify events that could be early warning signs or predictors of changes in mental health, such as homelessness and changes in employment status.

Cogito will expand the success of the initial pilot study to continue testing the app with a veteran population, and partnering with VA clinicians to further identify additional methods for intervention and support. With mobile health, clinicians can leverage the accessibility and widespread adoption of smartphone technology to augment their services and clinical care, and veterans can benefit from the convenience of personalized, direct, and real- time support.